The Bird in the Bush by Eugene Manlove Rhodes 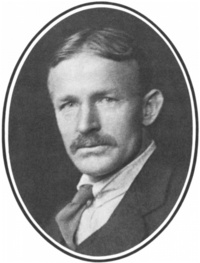 I guess Adam had the best time anybody ever did, namin’ things. Ever notice what good names you find in a thin-settled country? That’s cause they don’t have no prominent citizens to call things after.
My first encounter with this well-regarded author. I found the language a bit baroque and long-winded in this tale leading me to never quite settle down into the narrative and experience the people and place. The language itself acted as a buffer between me and the world the author was creating.
Perhaps that is not always the case.
at March 06, 2019 No comments: 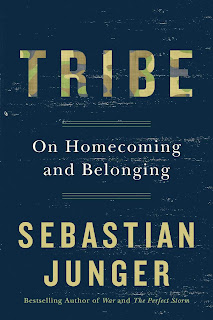 This slim volume is packed with superlative insights. Junger is able to weave evolutionary psychology, American Indian History, surviving earthquakes and mine disaster stories, and his own experience as a war correspondent into a synthesis that seeks to explain why so many of us, not just returning veterans, feel so disconnected from one another.


We live in a world of social media with many of us tallying hundreds of “Friends” and “Followers” and yet in actuality we may be able to count on the fingers of one hand people that we really [maybe] know we could count on when “it” hits the fan.


If we factor out, “When it hits the fan” we’ve got to come to grips with the fact that, hell, many of us have never even met our social media “friends” let alone sat down at a table with them to get to know them.


Junger weaves a beautiful tale that begins with the copious accounts of American Frontier settlers who chose to “go Indian” and walk away from “civilization” and live with the surrounding tribes. He offers countless examples of returned “captives” who made desperate attempts to get back to their newly adopted “tribe.”


This is puzzling in light that “civilization” even at that time offered so many more conveniences and assurances and yet there was something about this tribal set-up that was deeply and more viscerally appealing.


He offers compelling and thought-provoking evidence that crime, suicide, depression, and so many other negative civilized social factors plunge in the wake of extreme hardship: earthquakes, floods, war zones and the like. [If this surprises you, it should be a happy surprise, and he offers all the documentation you could want in the endnotes to run down his sources.]


He observes, just as Nassim Nicholas Taleb has in the past, that there is a flip-side to Post Traumatic Stress Disorder and that could very well be called Post Traumatic Growth. The human body responds to challenges and stressors most often in positive ways, after all that is what exercise is, sports training, intense study sessions that leave one feeling weak and drained but stronger and better for the effort in the aftermath of the work.


Junger expands this “exercise is good for you” and “study is good for you” dictum to include group struggle, group inter-reliant community is also good for us. And in many senses it might be more vital than physical training and mental study.


Junger offers invigorating evidence that the copious luxuries that we enjoy in the First World may be the very things that lead to a sort of disconnected ennui that keeps us feeling a bit adrift and unconnected, unmoored despite the ability to reach out and “socialize” as never before. We may have bonded to our “stuffed animals” and to not to real life. [If that metaphor is lost, read the book for a big “Aha!” moment.]


On the personal side, there’s not a damn thing inside the book that did not resonate with me. My own anecdotal evidence points to deeper bonds or experience with other humans that I have struggled with and engaged in an activity that was an active challenging “doing” of some sort as opposed to yet another round of passively consuming entertainment or noshing on another restaurant meal. I’ve always found that folks who have jumped off a cliff with me [literal or metaphorical] or worked alongside the grill with me were cleaved a bit tighter to my heart.


These doings can be of the physical variety, mental, or emotional variety. Junger tells us that those we have sweated alongside with, worked through a challenge with, withstood embarrassment with, risked with build and engage the human spirit in ways that simple living on cruise control cannot.


There is a science-based, articulate life-affirming message for building a better you amongst a like-minded self-chosen tribe in these pages. A tribe that is immune or at least indifferent to the trivia of the “super-tribe” that persists in telling us that this or that world “leader” or disposable “pop figure” or “pop artifact” holds any deep value to our lives.


Deep personal meaning and authentic connection with tribe-members cannot be forged in a sea of trivia or a “safety-helmet” world of non-chance taking. It must be actively engaged, actively pursued, whole-heartedly embraced. And the good news, Junger’s book shows us that the “striving for the tribe” can be enjoyed by all: men, women, and children, no matter age or “ability.”


I fear this review may have done short-shrift to the import or the impact of this book, and if I have rendered this a “Doesn’t sound too interesting to me” judgment, that is all on me and not Mr. Junger.


This is a vital important work. I yearn for tribal interaction and this articulate volume is an interesting sign post for some form of walking away from certain aspects of the “civilized” world and communing with like-minded tribe members who know that the struggle (large and small) is where the bonds are forged, life is lived, and eyes are opened.


If you read this book and are similarly struck, welcome to the tribe! Let’s grab this thing called life and have an adventure!
at March 05, 2019 No comments: 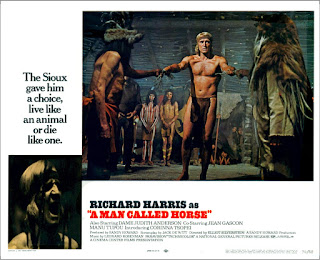 He went home three years later. He explained no more than to say, “I lived with the Crows for a while. It was some time before I could leave. They called me Horse.”
He did not find it necessary either to apologize or to boast, because he was equal to any man on earth.
An absolutely superlative story. It is fine narrative fiction but any one also familiar with Sebastian Junger’s non-fiction premise propounded in his book Tribe will find extensive food for thought here.
Some stories are stories, and some are fingers gesturing to insight; this is one of the latter.
at March 04, 2019 No comments:

Wine On the Desert by Max Brand

There was no hurry, except for the thirst, like clotted salt, in the back of his throat, and Durante rode on slowly, rather enjoying the last moments of dryness before he reached the cold water in Tony’s house. There was really no hurry at all.
The tale starts well, as most Brand will, but I confess that apparently I am unconstitutionally able to finish one of his works feeling satisfied. There is something a bit baroque in his work, and a hint of uninformed slap-dashedness that takes me out of the narrative
If you do not suffer from the same prejudice and have an affinity for Brand, well, this tale is highly regarded—you may win with it.
at March 01, 2019 No comments:

“ Bobby, men is the cheapest thing in the world! I can buy all the men I need. It’s like buying nails—by the pound or by the keg, whic... 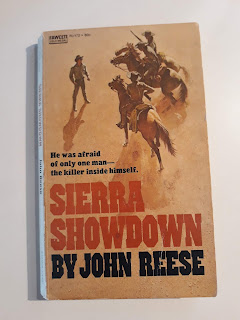