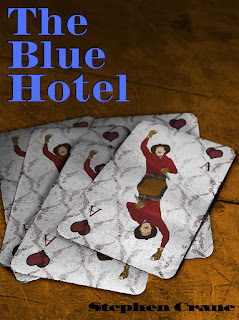 “One morning, when a snow-crusted engine dragged its long string of freight cars and its one passenger coach to the station, Scully performed the marvel of catching three men. One was a shaky and quick-eyed Swede, with a great shining cheap valise; one was a tall bronzed cowboy, who was on his way to a ranch near the Dakota line; one was a little silent man from the East, who didn't look it, and didn't announce it.”


Stephen Crane displays his fine ability to paint a scene in a few naturalistic brush strokes in this tale of an industrious hotelier that turns to a rumination on “justice” and how wide the web of accountability just might be.


Whether or not one agrees with Crane’s sting in the tale of his moral, there is much here to enjoy in scenes that feel more like reportage than narrative fiction.
at November 10, 2018