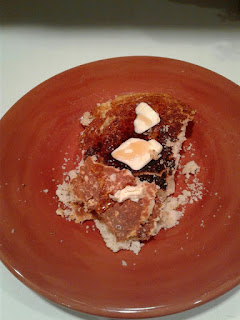 Occasionally, I will offer some samples of chow that I have come across in old articles or pamphlets on chuck wagon cooking, lumberjack fare, American Indian recipes and the like.
Well, here’s one with a contentious name. This simple “cake” of cornmeal, salt, and water is called, in various regions: Johnnycakes, johnny cakes, jonnycake, ashcake, battercake, corn cake, cornpone, hoecake, hoe cake, journey cake, mush bread, pone, Shawnee cake, jonakin, and jonikin.
It is surmised that the name is either a slurring of the word “Journey” cakes because you could pack up more than a few of these, toss them in a saddlebag and have them on your journey.
Or, it could be a slurring of “Shawnee” cakes referring to an American Indian recipe encountered by Eastern settlers.
Whichever way you have it we gave it a shot. I made a version based on a recipe I found in an old book on lumberjacks. That recipe called for a touch of milk after adding boiling hot water to the initial batter.
Note: Many “Shawnee” cakes use zero milk, and it strikes me that the batter looked good to go before the addition of milk. I’ll try it that way next time. The boiling water seemed to be enough.
I fried them in a bit of butter and we topped with butter and a drizzle of real maple syrup.
The Verdict: Amazingly delicious. Such simple ingredients provide a light only semi-sweet flavor. We could only say it was akin to a lighter pancake that didn’t have that heavy sweet feeling to it. We will be having them again.
at January 25, 2019

Email ThisBlogThis!Share to TwitterShare to FacebookShare to Pinterest
Labels: food