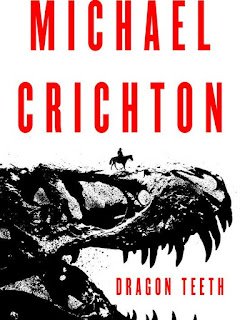 “Damn you,” Johnson would say, irritated. The man was nothing but an uneducated shopkeeper putting on airs.

“I am not the problem,” Lewis would reply, taking no offense. “You are the problem. Now come: try again.”

Here we have Michael Crichton’s only Western novel published posthumously. The timeline has it written perhaps in the 1970’s and it still has the mark of his trademark blending of science and narrative, here in the form of the Dinosaur Bone Wars of Professors Cope and Marsh, actual feuding personages.

Will follow our naïve young protagonist Westward and watch him mature and learn more than a good deal along the way.

It is not the most polished of Mr. Crichton’s several fascinating works [perhaps that is why he held it back] but it is still an intriguing look at his sole dip into the genre.

Note: The author was noted for his instructive asides where one feels the wiser for having read his fiction. I must admit his perspective on the American Indian titles “The Indian Village” found about halfway through the novel is mighty perceptive. Let us not forget that Mr. Crichton, among many things, was a skilled anthropologist.