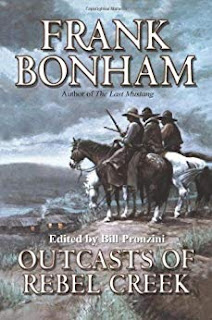 “Will Starrett squatted before the campfire in the creek bottom, drinking his coffee and watching the other men over the rim of his cup. In the strong light from the fire, the sweat and the dirt and the weariness made harsh masks of their faces. They were tired men. But pushing up through their fatigue was a growing restlessness. Now and then, a man’s face was lost in heavy shadow as he turned away to talk with a neighbor. A head nodded vigorously, and the buzz of talk grew louder. To Starrett, listening, it was like the hum a tin of water makes as it comes to a boil. The men were growing impatient now, and drawing confidence from each other. Snatches of talk rose clearly. Without the courtesy of direct address, they were telling Tim Urban what to do.”


That magnificent passage opens this lean Frank Bonham tale. He gives us a dirt-grimed account of desperate farmers fighting a grasshopper invasion. In this tale there are no black hats and white hats and no showdowns in the street.


Rather it is one of those tremendous Westerns that takes flesh and blood people, pits them against the elements and sees what shakes out as the stresses of survival and the fatigue of a natural trial grinds them down.