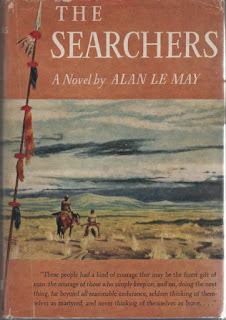 “He made a labored calculation, and decided Laurie was twenty-one. That explained why she seemed so lighted up; probably looked the best she ever would in her life. She was at an age when most girls light up, if they’re going to; Mexicans and Indians earlier. A look at their mothers, or their older sisters, reminded you of what you knew for certain. All that bright glow would soon go out again. But you couldn’t ever make yourself believe it.”

A summary of this classic is likely unnecessary as fans of the genre are already familiar with either the novel, or more likely the classic John Ford/John Wayne film.
In short, we have a ride to retrieve a young girl abducted during a Comanche raid.

But the novel is more than the action sentence summary would suggest. The opening quote shows the author is steeped in the realities of the period, people, and places. He brings a poet’s eye to what is often in other books a mere revenge ride tale of gun smoke action.

Action does abound, but the mature reader is in for a treat of wise observation.