“When a Document is Official” by Frederic Remington 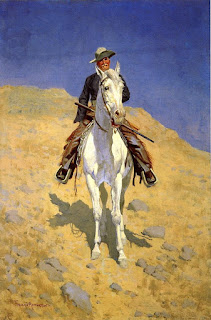 Men with the bark on do not say things in their lighter moods that go for much; but when these men were behind a sage-brush handling a Sharps, or skimming along the tailing buffaloes on a strong pony, what grunts were got out of them had meaning!

The artist Frederic Remington who so ably rendered what he saw into visual form also was quite handy with the written word. He lived in the midst of much of what was and this first hand observation fills his prose pieces with a verisimilitude that many others simply must infer via research.

This tale in the campaign against Sitting Bull is filled with such on-point observations.
at September 12, 2019