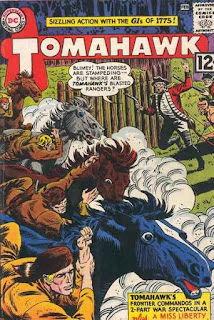 “’Can’t’ is not a Ranger word, Kaintuck! What’s impossible for ordinary men to do just takes Rangers a mite more time!”


Another delving into the comic book world of the genre. I spent an enjoyable 20 minutes with two issues of Tomahawk from 1970. Each issue featured two Ranger stories with a crew of Revolutionary War Rangers under the command of Tom Hawk, a Ranger receiving orders from General Washington himself.


We are clearly seeing a kiddie idealized version of Rogers Rangers and there is nothing wrong with that being a big fan of both the real Rangers and Kenneth Roberts’ magisterial novel The Northwest Passage.


Not essential for the Western comic genre but the Eastern woodlands settings and the Revolutionary War period mark it as unique.
at September 20, 2018