Western Quote & Lesson of the Day 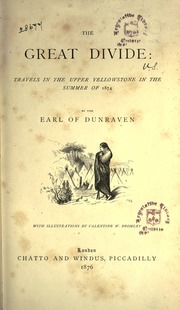 The following comes from Windham Thomas Wyndham-Quin, the 4th Earl of Dunraven & Mountearl. This Welsh nobleman travelled to America’s “Wild West” in 1874 to experience its wonders and dangers.

Despite facing grueling hardships on the trail, in camps, climbing mountains, almost losing his life in river fording,  in “near miss” encounters with less than amiable tribes he writes in his book The Great Divide, a memoir of his travel experiences, the following:

“I never have an adventure worth a cent; nobody ever scalps me; I don’t get ‘jumped’ by highwaymen. It never occurs to a bear to hug me, and my very appearance inspires feelings of dismay or disgust in the breast of the puma or mountain lion. It is true that I have often been horribly frightened, but generally without any adequate cause.”

That last sentence there is the kicker.

You’ve got a man who will travel an ocean to journey thousands of miles in a land that could be less than forgiving, and in his own narrative he recounts many exploits that would quail our pampered 21st century brothers and sisters (well, they quailed me, at least) and yet his observation to himself, and advice to us-- Most of what frightens us is nothing at all.

If a man steeped in an environment that could very well kill him comes to that observation, just what are our contemporary selves so stressed about or frightened of?
at September 27, 2018