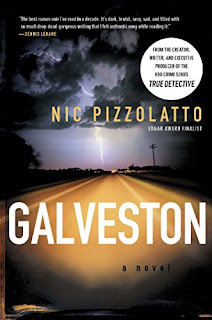 “I've found that all weak people share a basic obsession - they fixate on the idea of satisfaction. Anywhere you go men and women are like crows drawn by shiny objects. For some folks, the shiny objects are other people, and you'd be better off developing a drug habit.”


This neo-Western by Nic Pizzolatto, the creator of HBOs True Detective series is big on bleak observation and long on heart. It is no spoiler to say that it is the saga of a Galveston loan shark enforcer called “Big Country” who on the same day he receives a fatal diagnosis has rumblings that his unsavory employers have less than ideal plans for his already truncated future.


There are big themes here, redemption being one of them. A very fine example of what can be done with old ingredients.
at August 21, 2018