The Creed of Violence 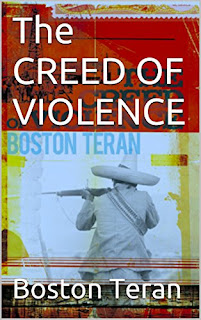 
A cynical, violent and gorgeously written novel positioned during the onset of the Mexican Revolution. Author, Boston Teran, gives us a father-son duo who also serve as the antagonist-protagonist—with the father “Rawbone” spouting some of the juiciest dialogue I’ve read in some time.


Teran draws parallels between the Mexican Revolution and who might really have been behind its inception and todays roil and turmoil in the world. Whether one agrees with the politics or not is irrelevant as the novel itself is a treat.


Fans of James Carlos Blake and Frank O’Rourke will find much to appreciate here.
at August 01, 2018