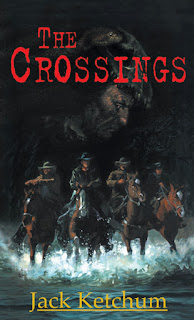 “While Hart was thinking it over Donaldson rolled himself a cigarette and drew the sack shut with the string held between his teeth and when he raised the match there it was, a jack of diamonds staring out at us between his ratty shirt and wool jacket. I saw it and Hart saw it and probably so did Heilberger. I guess that like me Hart simply couldn't believe what he was seeing.


"Jesus and Mary on a broomstick," he said. "You could at least be a little careful, couldn't you?"


He didn't seem angry, only more or less annoyed with Donaldson, but he drew his gun out nevertheless — some huge grey antique of god knows what vintage — and set it on the table and when Donaldson saw this monstrosity pointed in his direction he began fumbling for his own gun and Hart said don't do that which stopped him for a moment but then he went back to fumbling again, just some fool in a panic and Hart said dammit, George, don't do that now but by then Donaldson had his own gun out so Hart had no choice but to pull the trigger.


Visceral horror author [and sweetheart of a human being], Jack Ketchum penned this brief western novel—his one and only. This is a fine novel, but it suffers having been read back-to-back with S. Craig Zahler’s similarly themed Wraiths of the Broken Land [also reviewed here.]


Ketchum’s laconic characters and their “small doings” are beautifully done and I’ll be honest I yearned a bit for more of this familiar but well-executed tack.


At some point it seems the author felt it was a duty to hew to his reputation or what his usual readers wanted and lay on the violence thick and heavy. Readers of this blog know that I have no problem with violence portrayed upon the page, but I must admit, read in tandem with Zahler, this seemed to pale a bit.


The violence, as over the top as it is, is still no match for Zahler’s brand of mayhem, but that is not the beef here. This violence seems to lack the emotional resonance and character gut-punch of Zahler’s work. This is odd in that Ketchum handles character affinities so well in the milder moments.


With all this said, this is a brief novel, I enjoyed reading it, and perhaps these nit-picks are merely unfair comparison with what was recently consumed.


Mr. Ketchum passed away recently and it is a shame that he did not return to the genre as there is much here that shows a good grasp of Western humanity.
at August 27, 2018