Wraiths of the Broken Land 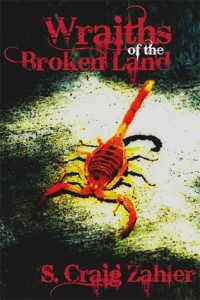 “Although the gentleman knew that he would be changed irrevocably by the act of killing another man, he admitted to himself that he was already different—aware of his mortality in a physical way and cognizant that his most cherished viewpoints did not in any way alter the world that happened violently around him. The scorpions had shown him that he was not immune to death.”


Friends, this is one gut-punch of a novel. S. Craig Zahler’s second Western [his first, A Congregation of Jackals is also reviewed on this blog] continues to display the author’s heady mixture of gorgeous prose, good grasp of the genre, and almost jaw-droppingly over-the-top set-pieces of violence ever presented on the printed page.


This ultra-violence is no mere effect or grab at exploitation. Some genres are founded almost entirely on the ability to push the limits but often these become exercises in one up-manship leaving any pretense of narrative ambitions in the dust in order to get to the grit, gore and grue to moisten that dust.


Not so with Zahler. This would be a mighty fine novel if it were not so tinged with red, but…I for one, find his violent visions fascinating.


It must be said, this may not be for all tastes. If you enjoyed his prior work, including his excellent films Bone Tomahawk and Brawl in Cell Block 99 you will find more to enjoy here.


A great toe in the water—if you read and survive the first chapter you’re in for a helluva ride.


If that chapter turns you off. Proceed no further—things get much worse from there.
at August 23, 2018