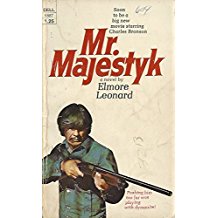 “You’re making sounds like a mean little ass-kicker, but I ain’t convinced.”


This lean 1975 novel from Elmore Leonard catches Dutch in his transition from primarily a Western author to a crime author. It is, in essence, a modern day Western, with our melon-farmer hero facing many of the same crises that stood in the way of Leonard’s pure western heroes. [Leave it to Elmore Leonard to make melon-farmers cool.]


It is a laconic western oozing with testosterone and cool and a fine way to spend an afternoon.


BTW-The 1974 flick with Charles Bronson as Mr. Majestyk and a script by Dutch is also mighty tight fare.
at April 12, 2018 No comments: 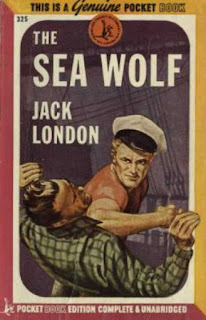 Let’s reverse the usual review method today. We’ll start with the opinion and end with the extract as I have chosen a lengthy one.


Jack London wrote the Sea Wolf in 1904, the year after his also classic The Call of the Wild [also reviewed on this blog.] Some may scratch their heads at this sea-faring tale being classed as a Western, but I see this hard-bitten frontier tale of overcoming hardships and forging spirit as kin to the pioneer stories of the eastern woodlands or the tales of overland prairie travels or survival tales of the southwestern desert.


This book is hailed as a classic, which can mean it’s “boring but important” or that it’s actually quite good and a touchstone. My take on this one, is the first half works beautifully. I loved Wolf Larsen’s observations delivered robustly here and there, but as it wore on it seems to sink into a bit of melodrama that is less Larsen focused. To my tastes, the novel needs Larsen to keep its heart beating.


With that said, I enjoyed it quite a bit. I’ll allow the lengthy extract to cement the theme of bootstrapping self-reliance.


I confess I had never had such a question asked me before, nor had I ever canvassed it. I was quite taken aback, and before I could find myself had sillily stammered, "I am a gentleman."


His lip curled in a swift sneer.


"I have worked, I do work," I cried impetuously, as though he were my judge and I required vindication, and at the same time very much aware of my arrant idiocy in discussing the subject at all.


There was something so imperative and masterful about him that I was quite beside myself -- "rattled," as Furuseth would have termed it, like a quaking child before a stern schoolmaster.


"Who feeds you?" was his next question.


"I have an income," I answered stoutly, and could have bitten my tongue the next instant. "All of which, you will pardon my observing, has nothing whatsoever to do with what I wish to see you about."


But he disregarded my protest.


"Who earned it? Eh? I thought so. Your father. You stand on dead men's legs. You've never had any of your own. You couldn't walk alone between two sunrises and hustle the meat for your belly for three meals. Let me see your hand."


His tremendous, dormant strength must have stirred, swiftly and accurately, or I must have slept a moment, for before I knew it he had stepped two paces forward, gripped my right hand in his, and held it up for inspection. I tried to withdraw it, but his fingers tightened, without visible effort, till I thought mine would be crushed. It is hard to maintain one's dignity under such circumstances. I could not squirm or struggle like a schoolboy. Nor could I attack such a creature who had but to twist my arm to break it. Nothing remained but to stand still and accept the indignity. I had time to notice that the pockets of the dead man had been emptied on the deck, and that his body and his grin had been wrapped from view in canvas, the folds of which the sailor, Johansen, was sewing together with coarse white twine, shoving the needle through with a leather contrivance fitted on the palm of his hand.


Wolf Larsen dropped my hand with a flirt of disdain.


"Dead men's hands have kept it soft. Good for little else than dish-washing and scullion work."


"I wish to be put ashore," I said firmly, for I now had myself in control. "I shall pay you whatever you judge your delay and trouble to be worth."


He looked at me curiously. Mockery shone in his eyes.


"I have a counter proposition to make, and for the good of your soul. My mate's gone, and there'll be a lot of promotion. A sailor comes aft to take mate's place, cabin-boy goes for'ard to take sailor's place, and you take the cabin-boy's place, sign the articles for the cruise, twenty dollars per month and found. Now what do you say? And mind you, it's for your own soul's sake. It will be the making of you. You might learn in time to stand on your own legs and perhaps to toddle along a bit."
at April 11, 2018 No comments:

A Killing in Kiowa 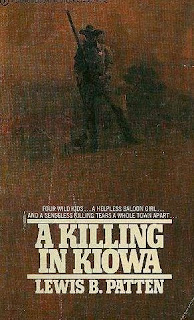 This brief 1972 novel by Lewis B. Patten touches on a familiar theme for this author--a frontier outrage and the aftermath of passion skewed justice.

Here, we have the aftermath of a rape which occurs on page one that sets events in motion. This short novel is mature and treats nothing as black and white. It follows a formulary path but there is a maturity and wisdom here that had me enjoying the ride.