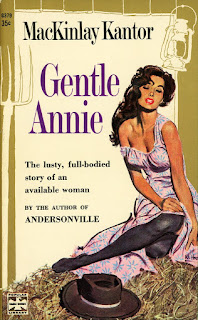 When we reached the place where Cotton had left his horse and buggy, we had a few moments’ conversation. The Goss brothers spoke with rare feeling about Charley Tatum and what had happened in the bar. They swore seriously and calmly, with astonishing fluency. I was to find that this was a habit they practiced by themselves; in some strange fashion it accounted for the cleanliness of their talk when they were with women or strangers or with people whom they did not like. To be admitted to a swearing bout by the Goss boys was a rare privilege; it marked one’s acceptance by them.


A Western by the author of the Pulitzer Prize winning Andersonville. I’ll confess I have not yet read Andersonville and I will also confess that this novel, my first visit with Mr. Kantor does not have me rushing to the next title.


This novel of a train-robbery investigation starts beautifully, and one knows they are in capable hands, but as it continues, we are introduced to a love-rectangle that confounds in both believability and its apparent purity.


So much time is spent on the soap opera of how these genteel amorous mechanics work that I was a bit exasperated. One is left scratching the head wondering how any single man, let alone three feel so strongly for such an exasperatingly fickle character.


We add to this concatenation of curious emotions an askew morality regarding family dynamics and robbery that we are to assume the author wishes us to sympathize with.


The fault may be this reader, but I found this novel, while well-written, a chore to finish. 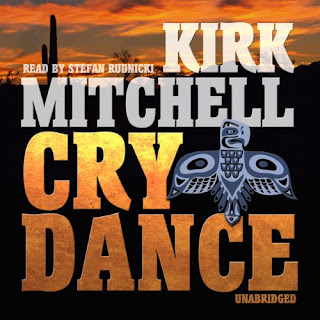 “Forgive my petulance this evening, Mr. Parker. I have this overwhelming feeling I’ll be out of a job this time next week.’

‘Well, you were looking for a job when you found this one, right?’”

Author, Kirk Mitchell, possesses a law-enforcement background and a familiarity with the areas of which he writes. This was the inaugural volume of a modern-day mystery-series featuring Bureau of Indian Affairs investigator, Emmett Quanah Parker of the Comanche tribe, and mixed-race FBI agent Anna Turnipseed.

A body that has been bizarrely mutilated is found in the Havasupai Nation, this is the incident that brings together our protagonists.

Mitchell gets the law enforcement turf wars down pat but even more interesting is the almost otherworldly interactions between different tribes. He gets the “All Indians ain’t the same” correct and walks our characters through the heady atmosphere of tribal politics and even deeper tribal belongings that manifest behavior hard to understand to an outside homogenized culture.

While the mystery works, I’ll admit that it was the insight and depth of this unusual setting that truly held my interest.

A worthy read for fans of Hillerman.

“The Last Ride” by Don Winslow 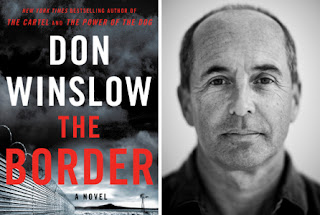 Noted crime author, Don Winslow, released a volume of six novellas titled Broken. Five of these hew to his usual terse and quick-reading style and a few of them go so far as to bring back characters from past novels for another go around.

I have enjoyed Mr. Winslow much in the past, but I would be a liar if I didn’t say that this felt a bit by the numbers. It is well done mathematics but, all the same, nothing exactly new.

That is, until the last novella: “The Last Ride.”

Here Winslow takes a shot at a neo-Western in the tale of a Border Patrol agent wrestling with questions of right and wrong and the border between duty and honor.

Does it have a political bent that may rile some?

It does at that, as Mr. Winslow is not shy about his opinions. One must offer him the grace that his opinions come from a very informed place.

So how does he do in the western genre?

Pretty damn well. This is easily the high-water mark of this volume for this reader.
It limns a complex character in almost iconic strokes and renders personal integrity in elegiac terms.

Although it goes its own way it calls to mind Edward Abbey’s splendid The Brave Cowboy.

I’ll not rate the entire volume but this story is an easy A.