Rim of the Desert by Ernest Haycox 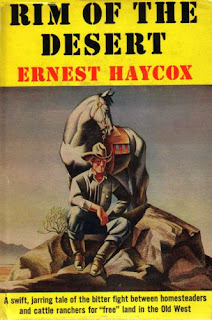 “He was bold enough for anything, but sufficiently smart to take his good time to read what he saw.”

Mr. Haycox’s 1940 Rim of the Desert is the usual Haycox fare, and that is a very good thing.

We have plot points that are very familiar, but…we have insights into character that can only come from a man of keen observation and deep understanding.

I’ll allow several extracts from the novel to stand-in for my “review.” If you like these, well, you’re in for a treat when you read it for yourself.

“Keene watched Aurora disappear beyond the opposite rim of the river bluff, attracted by the shape she made in the sun, in the golden haze of dust. These were the things, though he didn’t know it, his senses forever awaited in eagerness---sounds and blends of fragrance and scenes which took fugitive shape and left their unforgettable impressions: the single moment when a campfire flamed formed a perfect taper against the heart of night; the echo of one word spoken by a women from the depths of her soul; the cold and immaculate deadliness of a diamond-back coiled at the instant of striking; the thread of some strange smell in the spring wind which, caught briefly and by accident, broke every old thread of a man’s career and set him off on strange roads. These were the fragments of a greater mystery, the revealed pieces of an unrevealed puzzle whose answer he sought—yet he knew not what he sought. All the cold ashes of his campfires made an unerring line of search. Some duty, some labor, some love. Somewhere---”

She spoke in complete candor. “It would be that way if I married you, Cleve. A bargain between us, and no love. I don’t love trust very much. I know how it should be but I never really see it. Half of the women in this world marry without it and some of the others lie to themselves when they think they have it. I don’t like that. I’d rather not have any of it than to have a miserable little bit to dole out here and there over a whole life.”

He was flat on his back, long and boneless, soaking in the night’s comfort. He had the ability to seize whatever goodness the current moment offered, to enjoy it before it vanished.

He walked forward, his hand extended, and when Keene took his hand Stewart said, “Well, it was none of my business.” He ran the flat of a palm across his mouth, staring strangely at the blood there. “I didn’t feel you land that blow. Odd.” He wanted to say something to Keene, but he could not bring himself to admit the depth of fear that had been in him—the fear of being afraid. Nothing but the bitterest torture of soul had driven him to this fight, nothing but the insufferable agony of a man who had to know about himself at last. Now he was silently saying: “The worst of it is the thinking of it—afterwards there is nothing to be afraid of,” and a great load rolled off Cleve Stewart’s heart and he was a bigger man than he had ever been.

“I want to tell you something. I followed the trail for many years. When you get to the other side of the hill—remember this, son—the only thing you’ll find there is just what you brought with you.”

He swung to the saddle and for a moment his eyes admired her. She showed no fear and she said none of those things that disturbed a man or tried to take him away from the things that had to be done. She had will, she had composure.

“The harder life is,” she murmured, “the less people ask of it. People who don’t know fear or hunger or pain want a lot. Those that face those things are happy if they have one small break. Terror makes us all very humble. How quickly pride falls.”

“You never worry about the future, do you?”

“No use. All things come in time.”

“So, then,” she said, “it is today you love. Yesterday’s gone and tomorrow isn’t here—and it is just today that counts.”

“Best that way,” he answered. “Feels fine to eat when you’re hungry, to watch the ground turn color when the sun goes down. Maybe to smell water when you’re thirsty, or see lights shining over the flats when you’re tired of riding. If you look too far ahead you miss what goes on now. You never stop to enjoy the present.”

“But pretty soon the present is gone and then you are old and alone and what do you have?”

“That comes too,” he admitted. For me and for you, for everybody. Makes no difference, does it? The thing is, what can you look back on when you’re old? What can you remember?”

He found more in Keene to admire at this moment than ever before. It was not a simple thing to fight. It was not easy to move blindly through snow, playing hide and seek with trouble. It took courage, but it took something more as well—it took a sound knowledge of other men, the ability to read in their eyes the things they would do; it took a hard-gained experience in all the clever tricks of living, an ability to listen into the wind, to read the patterns on the earth, to make a story out of dust and distant motion. As an educated man, possessing the prejudices of education, Cleve Stewart always had felt a certain contempt for men whose lives were confined to action; to him they were half-blind, knowing nothing of the great and gentle philosophies which made life understandable.

But somewhere in the last twenty-four hours Stewart’s world had come down about him; a complete change had occurred in him. The wisdom which came from earthy men, the wisdom of survival and bitter wind beating into a man’s bones, of hunger suffered and thirst endured—this was the real wisdom, gained not from books or the tales of other travelers but personally experienced so that a man got it into his spirit and nerves and blood. A man had to know of what he was made. Knowing that, he knew everything.

“Any time you pass my house, now and twenty years from now, there’s a chair at the table.” 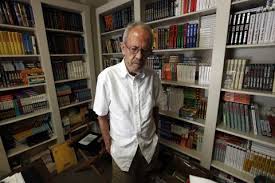 A time would come, within a few years, when Ruben Vega would go to the Church in Benson, kneel in the confessional, and say to the priest, “Bless me, Father, for I have sinned. It has been thirty-seven years since my last confession…Since then I have fornicated with many women, maybe eight hundred. No, not that many, considering my work. Maybe six hundred only.” And the priest would say, “Do you mean bad women or good women?” And Ruben Vega would say, “They are all good Father.”

Boom! That is how Dutch opens this tale.

Immediately we have a handle on the swagger, the charm, the character of this Ruben Vega.

Not everything Mr. Leonard wrote is gold, but all that is gold, is 24-karat.

His keen eye tells with gestures, observed movement what a man or women is in briefly limned seemingly nothing actions.

His observations on laconic ease could serve as a primer for How-To-Be or How-Not-To-Be comfortable in one’s own skin and not merely a muddled poseur.

She said, “John, look at me…won’t you please sit with us?”

Now it was if the man had to make a moral decision, first consult his conscience, then consider the manner in which he would pull the chair out—the center of attention. When finally, he was seated, upright on the chair and somewhat away from the table, Ruben Vega thought, All that to sit down. He felt sorry for the man now, because the man was not the kind who could say what he felt.

It takes a considered eye to see and weigh such things in day-to-day life. A man of ever-present experience.

It takes a craftsman, no, make that artist, to make us see through those eyes.