A Conversation with Brent Towns 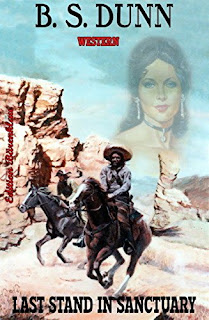 For those not in the know, I’ll allow Mr. Towns to introduce himself.


I did an interview with Paul Bishop a while back and he came up with the term “Kangaroo Cowboys”. I guess that’s pretty much true. I live in a country town in Queensland, Australia. I grew up reading and watching all things western. And now I’m living that dream by writing them myself.


I’m married and have a son.


My early years were spent on a place called King Island in the middle of Bass Strait, between Tasmania and Victoria.


I write under the names of Brent Towns, B S Dunn, Sam Clancy, and Jake Henry.


The man I blame for sowing the seed for what I do is, Rod Cooper, a family friend who gave me my first westerns to read.


Mr. Towns, I want to thank you for taking the time to have this conversation.


Thank you for having me, Mark.


Now, you profess yourself late to the Western writing game with your first novel published in 2015, that novel being Last Stand in Sanctuary, but you’ve been busy since your late start producing more than a few novels for Piccadilly Publishing under your own name, B.S. Dunn, and the Drifter series writing as Jake Henry. Late start but mighty prolific, what’s your writing routine?


I was definitely late. By about 10-15 years. But that’s the way things go sometimes. If I did it over again, I’d start earlier.


I also write under another name, Sam Clancy. These books I pen for Black Horse Westerns in the UK. 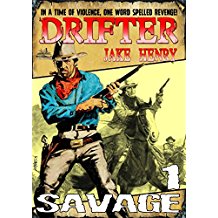 You use the word prolific. I look upon it as catching up on what I’ve already missed out on. As for writing routine? I do it when I have spare time. Mostly at night when everyone has gone to bed. Quite often when the clock ticks over to pumpkin o’clock I’ll still be sitting at my computer banging away.


You’ve declared yourself a fan of George Gilman’s Edge, and offer Edge and a favorite of mine Cuchillo Oro as inspirations for The Drifter. What is it about these violent loners that appeals to you?


These westerns take me way back to my childhood. I think I was thirteen or so when I read my first. We had a family friend, Rod Cooper, who had near enough to every volume of the EDGE series. I often blame him for my love of the western genre. And like a lot of readers will tell you, you either love or hate these types of stories.


But funnily enough, it wasn’t an Edge western which Coop gave me to read, it was a brown paper bag of Australian printed, Cleveland Westerns.


Are there other Edge-type characters that inspire your work?


There is only one that stands out in my mind from the many, and that is a series called BREED, by James A Muir. This was a name used by Angus Wells who wrote many westerns under other names.


Your work strikes me as having a stark, lean and mean Spaghetti Western feel, and I mean that as a compliment. Are you influenced by this film genre? If so, any favorite films come to mind?


Not really. I have watched a few but I wouldn’t say I’m a big fan. I like to watch all westerns and have plenty at home. Although writing takes up my time now where I would have normally watched one.


I like that you used the word lean. I want the reader to feel that my westerns are action-packed without too much other stuff to distract from the direction it is headed. I like to start out with something happening straight up that will hook the reader.


Take the first couple of lines from BUGLES AND BLOOD: Lew Eden wasn’t sure what he hated more—the ripening stench of the dead or the constant moaning of the wounded. It was a little after dawn, and the promise of another hot day, with the inevitable effect the heat would have on the already fly-blown corpses, did nothing to make him feel any better.


My opinion is that this puts the reader right in the thick of it from the start and hopefully they’ll want to read more. 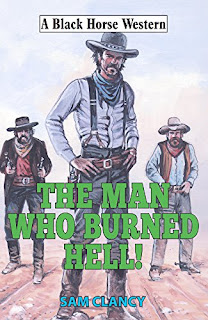 I think another good example is from an upcoming book THE MAN WHO BURNED HELL!: A bullet-riddled sign that had once read ‘Serenity’ stood on the outskirts of the town. The name had been crossed out with a slash of red paint and replaced by ‘Hell’ in crude hand-written letters. An apt name for the town it had become, rife with violent deaths and overseen by a man known as The Devil.


I guess what I’m also saying is that I find it hard to write any other way. I just like my westerns (The ones I read) to be full of action and I like writing the same way.


I sometimes joke that if I ever wrote a story that was say, 100,000 words long, I’d cut the population in Texas by half.


As for a film influencing any of my stories, I would only put that down to one. I watched a movie called FOUR FAST GUNS. It covered two brothers who were gunfighters. One good, the other bad. After I watched it I thought what a great idea.


I used that premise for a book I wrote called BROTHERS OF THE GUN.


As an Australian author, I have to ask, how do you nail the locations? Have you visited the West? Industrious researcher? Or simply a great imagination?


To answer your second question, no. I’ve never been out of Australia.


All of my research is done online or in books. Once I have the location of where and when the story happens, I then look up everything I need to know. Especially flora and fauna of the part of the territory my character is in. No use having a saguaro cactus in Texas if you know what I mean.


Sometimes it is all made up. I look at pictures of valleys and deserts and picture it in my mind. But you still need the flora and fauna to be right along with everything else.


That is why I like to plan my stories.


I’ve just finished writing a fictional story with Ben Bridges about the Battle of the Rosebud. There was a lot of research that went into it. Such as pictures of real-life people, accounts of what happened (Which vary greatly depending on what you read), I watched a couple of documentary videos on Youtube, and studied some maps with the different Indian and troop movements marked on them, too.


The thing to remember with this is, you’re never going to get it 100% right and that it is fiction and should be treated as such.


However, it was great to work with Ben on it and we have two others planned as well. One which covers Custer and another which covers the great Apache chief, Victorio.


I think many Western fans commonly think of the Western as an American genre, which clearly isn’t true, as your work bears out, as well as that of George Gilman and the other fine English Western writers. I am not as familiar with Australian Western writers, are there particular authors from “Down Under” that influenced your work?


There are three that stand out to me. Ones that I read when I was young and still read today. Between them they have written well over 2,000 stories. And I would hazard a guess that this number would actually range between 2,500-3,000.


You clearly have a love of the genre, what is it that gets you into the chair each day to tell a good story?


That’s just it. I love doing it. There’s no other way of putting it. If you don’t love writing you wouldn’t do it. It’s not like I’m a Lee Child or James Patterson. I wish I was and could say the money was great! But alas I’m not one of that small percentage of authors who have hit it big. But hey, I’m still doing it. If a reader out there gets enjoyment from what I do, then as an author I’m successful. (PLEASE BUY MORE BOOKS!!)


What’s coming up next from your pen?


At the moment, I’m working on the next DRIFTER story, LONGHORNS and BLOOD. Hopefully that will be finished in a couple of weeks. 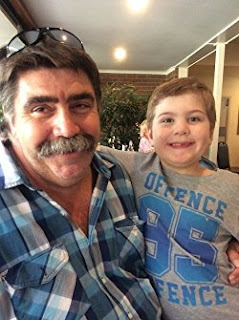 Once that is done I have the novelization of a movie script titled BILL TILGHMAN AND THE OUTLAWS to do. The movie is being shot at the moment.


After that I have the first third of the second LEW EDEN book RIDE TO GLORY to finish and that story will be complete.


Lew Eden is actually Ben Bridges’ character from his COMPANY ‘C’ book, HIT ’EM HARD. Ben asked if I would like to write an instalment for the series and I jumped at the chance. (After I pestered him about letting me write something.) Once the book was finished I approached Ben about the Lew Eden character and proposed we give him his own series. Again, he showed faith in my writing and agreed.


Hopefully all this will be done before the end of the year.


I must add though that all of this wouldn’t be possible without my wife, Samantha, who is my editor. Once I’m finished my manuscript I give it to her and she goes over it for me while I start the next. Once she’s done I go over it a final time and make any last adjustments.


Thank you so much for taking the time to have this talk. I look forward to what adventures you offer next!