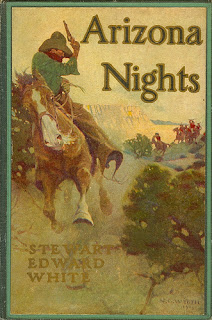 "He's one of those long chance fellows," surmised Jed. "He likes excitement. I see that by the way he takes up with my knife play. He'd rather leave his hide on the fence than stay in the corral."


A short story collection from the turn of the last century. Stewart Edward White’s tales veer from good-natured tall tales, to treasure hunts in the desert, to stories of survival to some out and out shocking stark violence. It is an intriguing mixed bag.


I remark on it for the last story, really a closing novella. A lonely rancher bargains for a mail-order bride, things go a bit less than serendipitously and his “revenge” is beyond Poe grotesque, and then, it somehow pulls off turning sweet and charming in the end—that’s quite a trick.


Truly an unusual volume. Not sure it’s a recommendation but I can’t say I was never not interested throughout.
at December 14, 2017