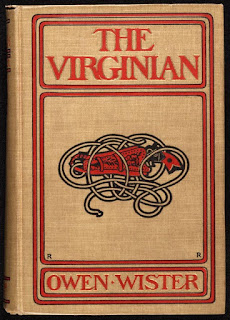 “When I went back again six years afterward, I was twenty. They was talking about the same old things. Men of twenty-five and thirty—yet just sittin' and talkin' about the same old things. I told my mother about what I'd seen here and there, and she liked it, right to her death. But the others—well, when I found this whole world was hawgs and turkeys to them, with a little gunnin' afteh small game throwed in, I put on my hat one mawnin' and told 'em maybe when I was fifty I'd look in on 'em again to see if they'd got any new subjects. But they'll never. My brothers don't seem to want chances."


What can I say about Owen Wister’s 1902 novel that hasn’t already been said? It is saddled with that onerous word “Classic” which often means frequently name-checked but seldom read. And to be fair, many classics can feel hackneyed simply because they were original at the time of writing but by the time we get to them, so many have copied, borrowed, stolen ideas from the “classic” that the classic itself feels a bit trite.


That is not wholly the case with this novel. I’ll admit there are more than a few places that feel that 1902 publication date writ large. There are also more than a few passages that are meanderingly long, and a few more that are so familiar to this 21st-century reader that they almost feel like parody but…there are more than enough “My God, that is solid writing, that is solid observation” passages that I see no reason to demote this fine novel from the Classic category.
at December 12, 2017