The Adventures of Bigfoot Wallace the Texas Ranger & Hunter 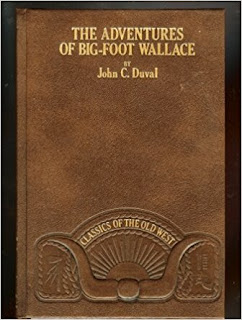 “The heads of the arrows used in war are barbed, and fastened on very slightly with deer sinews, so that when an attempt is made to extract them from anything into which they may be driven, they are almost always left behind in the wound. The only alternative is to push them through, whatever may be in their way—heart, liver, or lungs; but this, as you may well suppose, is a very dangerous operation, and besides, not a very pleasant one, even when not followed by fatal consequences. There is one serious drawback, however, to the bow and arrows in the hands of the Indians, and that is, that they are almost useless in very damp or rainy weather, owing to the fact that the strings they use are made of deer sinews, which stretch so much when wet that it is almost impossible to keep the bow properly strung; and, for this reason, it is always most prudent to attack an Indian force in misty or rainy weather, for they have to rely, then, mainly upon their old flint and steel guns, which are poor weapons except at very close quarters. There," said I, "Mr. Author, are some facts in regard to archery which you may note down in the 'Way Worn Wanderer' as beyond dispute."


In 1870 John Duval set pen to paper to immortalize the “as told to” life of one of the giants of the Texas Rangers; a giant both figuratively and literally, Wallace stood 6’4” tall.


It is shot through with choice observations, homespun declarations, action, but here even the laid-back portions of the account are a treat. His visit “back east” is simply delightful.


One can feel that the observant and knowledgeable eye of Larry McMurtry must have studied these pages hard in creating his own fictional Texas Rangers.


A rare thing in having non-fiction that plays as well or better than fiction.