The Unkindest Cut by Mark Hatmaker 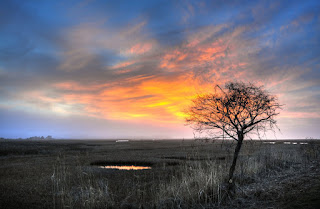 Readers, today I offer a bit of hubris as I proffer the opening chapter of my own first Western novel The Unkindest Cut.
I obviously hope that, if read, it is enjoyed, but I will warn that this ultra-grim vengeance tale ain't for all tastes. No feelings hurt if future chapters are duly ignored. Life can be too short to spend so much time with bad actors.


At least in this instance. Merck knew his history, and yet he was unable to avoid the ancient method of his own forced castration.  History was, indeed, repeating itself. Repeating itself in a manner best left forgotten upon some bloodied page. Merck’s knowledge of history was prodigious. The study came easy to him. So easily, that at one time at his Professor’s urging, in some dusty but comfortable office at a lesser-known institution of higher learning back East, he considered resigning himself to a lifetime of academia. That consideration had passed, along with his Professor’s recommendation (and approval), once Merck's “alternate” studies came to light. Still, there was no denying his gift for historical recall. It was this very gift that made his impending reproductive endgame all the more excruciating.


It was his understanding of what was being done to him; the hows, the whys, the method, the probability of survival, at every step of the way, the precise recondite knowledge of historical minutia that made the begged for blessing of a quick, if not easy death recede from his grasp. At every phase of his damnably slow emasculation, it was his own informed insight into what was being done to him that piqued some aspect of his curiosity, and this oddly detached intellectual observer struggled to remain conscious. This disembodied academic “third eye” allowed Merck to survive. That, and his now primal desire, no, make that need, to seek vengeance upon those that were doing this to him. Vengeance, a dime-novel sentiment, was not a word that would ordinarily spring to Merck's mind so readily; but here, no less a word would do.


Merck was to be castrated in the ancient Samaritan manner; how this method manifested itself here in this scraggy expanse of the American southwest he had not a clue. He wasn’t sure if his three torturers were aware of the origin of their evil. Probably not. Serendipitous discovery? Parallel cultural artifact? Instruction? Instruction from him?


Their slack expressions and a glimpse of the yellow sclera of one of the men’s eyes who strung him up convinced him that they, as many in this region are, were devotees of the poppy. Opium is a minor curiosity in this part of the globe, a welcome adulteration to the sun-bleached grim sameness of daily life, a gift from many unfortunate coolies. The three men, lackeys, nothing more, nothing less, had dragged him from the root cellar where he had been kept for the past five days, or was it six? He couldn’t remember. They threw him to the ground and he could feel one of them fumbling with his belt. Fifth century castration method did not come to his mind immediately.


“Where had that thought come from? Ah, Sir Richard Burton, an idea from one of his many exploits into places that did not want him. Was it his trip to the forbidden city of Mecca? Or perhaps...” He was drifting, he realized. He fought to return to the now.


At this point, Merck was hoping sodomy was all that was on their minds. That, at least, was survivable. Better than say, a rifle barrel roughly inserted into the anus as had happened to another traveler in this area, or so he had heard from a black-gummed cantina keeper outside Sonora. A rifle, a tree branch, a branding iron up the fundament would tear tissue and that would no doubt lead to sepsis as the contents of his colon invaded and consumed his own body from the inside out. No, sodomy was the lesser evil.


He struggled to think, “Was opium smoked or injected?” If he recalled correctly, it was smoked in this region.


His pants were torn away. He felt one of the men encircle his now bare waist with a rope and tie it tightly in the manner of a belt. Now the big one with the yellow eyes was grabbing at his genitals. He couldn't quite fathom what the man was doing to him.


“Is he’s trying to stimulate me?” was the first surprised thought that entered his mind.


He then saw the man produce a long coil of coarse rope; the kind used to tether pack animals in this area. He made a loop at one end of the rope and then framed Merck’s genitals with it.


He felt the yellow-eyed man pluck at his genitals again and then the loop tightened around them. The rough fiber bit into the flesh around the upper base of his penis and looped around and underneath his scrotum, thrusting his testicles through the loop and squeezing all together in an unbearable bunching of fleshy pressure. The yellow-eyed man then stood and placed a foot on Merck’s bladder to brace as he pulled at the other end of the rope and tightened the coil. Merck was seized by overwhelming pain that originated in his groin and streaked twin spikes of agony into his abdominal cavity. It was too much; Merck vomited a paltry stew of stomach acids and undigested weeds that he had consumed while confined to the cellar.


One of the men uttered something staccato in his language which made the others laugh. Merck, stomach now empty, dry heaved bringing up nothing but hot vile gases from a voided stomach. He tasted smoke, or did he smell it? Either way, the smell combined with the pain was adding to his nausea. The yellow-eyed man put the toe of his boot in his ribs and prodded him over onto his stomach. His bodyweight falling upon his billowing genitals launched another wave of dry heaves. His forced hyperventilation sucked chalky alkaline dust into his mouth, coating his tongue and gums with a patina of grit. He felt someone kneel onto his back. His left hand was grasped and wrenched backward forcing his arm into a hammerlock position just short of dislocating his shoulder.


“It would be that shoulder,” he thought, as the piercing pain in his collarbone reminded him of the canyon fall that had green-sticked his left clavicle years ago.


The pain in his shoulder was astounding but could not match the agony in his groin. He could feel someone tie his left hand behind his back to the belted rope around his nude waist. The knot was cinched tightly enough around his wrist to make him open his eyes; he could see a small fire had been made about twenty-feet from a long dead cottonwood tree.


One of the men was squatting next to the fire; he seemed to be prodding at it with a long stick or poker. Merck then felt himself jerked roughly to his feet. If possible, the pressure on his genitals was worse as gravity forced his blood downward in painful pulsations. He dared a glance at himself, the distended bundle of flesh was already turning a dangerous color of blue, spider-webbed with violet as capillaries burst in his scrotum. Yellow-Eyes, using the rope leading to his genitals as a leash, jerked him forward. Merck, nude from the waist down, followed with stumbling steps attempting to keep some slack in the tether attached to himself. The loose rocks on the arid scrabble that passes for arable soil around here cutting his bare feet.


Yellow-Eyes stopped before the lone tree, glanced at a stout limb approximately ten feet from the ground and then back at Merck. Merck’s mind drifted again, this time to the thought that many believe that the timbers of Christ’s cross were from the dogwood tree. Yellow-Eyes smiled, a mostly toothless smile, and mewled something again in his language that drew lascivious chortles from the others. He then threw the end of the rope over the branch. He pulled at the now dangling end of the rope causing Merck to shuffle forward until he was directly beneath the limb.


Yellow-Eyes then looked at Merck again. He was close this time, and Merck could see the ulcers on his gums. Oval, pus-ringed sores with blackened middles stippled his jaundiced-pink gums. Yellow-Eyes then drew a long knife from a scabbard worn at the small of his back. He held the blade inches before Merck’s face. The blade was undeniably sharp and meticulously cared for. As a matter of fact, it was the cleanest thing Merck had seen since coming here. It was so clean, it was almost beautiful. Yes, that was the word. Beautiful.


“What’s he going to do, slit my throat?” he thought. “At least a carotid bleeding out would be somewhat quick.”


Yellow-Eyes grabbed Merck’s free right hand, pulled it to his chest and then placed the knife in Merck’s palm. Yellow-Eyes closed Merck’s fingers around the knife handle, looked into his eyes and blew him a kiss. It was then that Merck knew exactly what was to happen to him.
at December 20, 2017