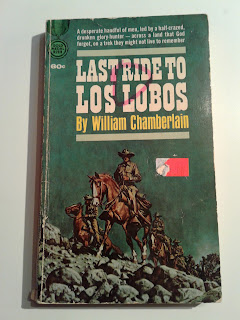 “The first streaks of dawn were curdling the eastern sky.”


That is a great line from William Chamberlain’s 1964 novel. There are many such lines, but this tale is somewhat of a curiosity. It reads as if two authors were at work here, one skilled, and one, well, not so much.


There are three loooong chapters of such superficial one-dimensional characterization I find it hard to believe it was written by the same person.


As on the plus side of the ledger, the vast bulk deals with a grimly detailed uncomfortable desert crossing and the believable deterioration of men under pressure.


If this was all this story was it’d be an easy A for any reader, but those out-of-place three chapters mark this one as rough territory.
at December 05, 2017