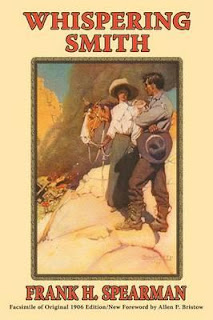 “Meantime, McCloud stuck to the mine, and insensibly replaced his Eastern tissue with Western. In New England he had been carefully moulded by several generations of gentlemen, but never baked hard. The mountains put the crust on him. For one thing, the sun and wind, best of all hemlocks, tanned his white skin into a tough all American leather, seasoned his muscles into rawhide sinews, and, without burdening him with an extra ounce of flesh, sprinkled the red through his blood till, though thin, he looked apoplectic.”


This novel from 1906 is a landmark of the genre known as the Railroad tale, novels and stories that told of adventure, romance, and mystery in, on, and around railroads.


Here, novelist Frank Spearman offers us what is perhaps THE textbook example of the genre and the often-filmed tale of the railroad detective Whispering Smith. It is a novel of its time and requires patience here and there as melodrama abounds, but I found more than enough pith within the pages to get a good deal of enjoyment from it.
at March 14, 2018