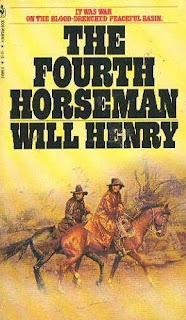 “For a little while he will sit his horse feeling behind him all the lost yesterdays, seeing ahead of him all the empty tomorrows. He will realize then, that for him there is no yesterday and no tomorrow, but only what little is left of today. When he feels that, he will no longer suspect where he is. He will know.


That gorgeous bit of writing can be found on page one of Will Henry’s 1954 novel and there are other such expressive gems to be found within.


But…I’d be less than honest to say that this was a completely satisfying book for me. Where Henry, in this volume at least, shows a perceptive eye his characters felt a bit removed to me. I never quite felt sure why our protagonists or antagonists felt as passionately as they did about certain actions. They seemed to leap and cavort to satisfy plot points in between bouts of beautifully expressive writing.


With that said, it is a well-written novel that seems to walk the tightrope between by-the-numbers formulary tropes and learned observations.