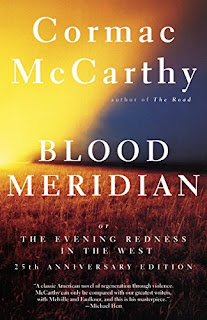 When they rode out of the Yuma camp it was in the dark of early morning. Cancer, Virgo, Leo raced the ecliptic down the southern night and to the north the constellation of Cassiopeia burned like a witch’s signature on the black face of the firmament. In the nightlong parley they’d come to terms with the Yumas in conspiring to seize the ferry. They rode upriver among the floodstained trees talking quietly among themselves like men returning late from a social, from a wedding or a death.

Undeniably evocative writing. To claim this novel is not a work of art is a bit narrow-viewed.

But…the novel’s stylistic choices that make up a large part of its artistic merit seem to leave the reader at a bit of a remove. In many passages the writing itself is so much the “story” that the reader [this reader, at least] was left admiring the colors on the canvas and less taking in the canvas as a whole.

I am reminded of the noir excesses of James Ellroy, himself a bold stylist of whom I have read much and enjoyed much, but I would be a liar if I did not admit that there is a “learning curve” expected of the reader to settle into what the author has to say.

McCarthy and Ellroy both seem intent and content with “Look at how I do this” which seems to push one a bit out of the narrative.

I enjoyed the novel. I admire the novel. But as an entertainment, I feel it lacks a bit.

Personally, I find James Carlos Blake’s In the Rogue Blood, a similar nightmare-scape, the better novel. It is equally gorgeous in its prose but never loses sight of the fact that “the tale is the thing.”