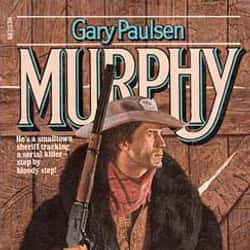 Murphy edged in the saddle so his gun was handier. He hated shooting off a horse. One of the times he’d been hit he’d been on a horse; he’d fired a shot and the damn horse had gone hog-wild on him. While he was trying to stop it and get another shot off, the man he had been shooting at used a rifle and put a .44-40 bullet through his right thigh. The bullet had gone on through and killed the horse—broke his back. Even though Murphy had been able to get a shot into the man’s pump and put him down, he still hated shooting off a horse.

Primarily known for his Award-Winning young adult novels, Hatchet being a notable example, Paulsen turned in a string of mature Westerns featuring a character by the name of Murphy, this novel being the first in that series.

So, how does a “children’s author” fare in this adult world?

Murphy is a real flesh and blood human being. He is no cardboard cutout hero. He has doubts, unacted upon desires, he suffers the pangs of everyday living and yet he still rises to the job of being a lawman in a small mining town.

Here Murphy is confronted with the rape and murder of a young child, adult fare indeed.

The outrage is handled well, as is the stab at early crime scene investigation.

Handled even better, and the heart of the novel, is Murphy’s affairs of the heart with a local widow.

This is all done with easy assurance.

But…what makes this novel less than an A [for this reader] is the plot resolution. It feels hurried. It feels as if Paulsen enjoyed the widow and Murphy and the time with them so well that he rushed to get past the incident that set the entire novel in motion.

I get Paulsen’s rush, I too, wanted more of Murphy and the time spent inside his experienced skull is akin to spending time around a fire with an old hand wise to many ways and honest to those he does not know.

The shoot ‘em up ending feels out of place in such an assured work.

Still, I look forward to spending more time with Murphy in the next volume.

Murphy edged in the saddle so his gun was handier. He hated shooting off a horse. One of the times he’d been hit he’d been on a horse; he’...