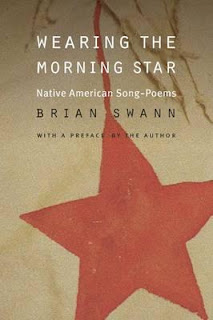 “Not enough
Never enough of her.
That one dancing there dancing
Never enough
Of the smell of her body
Wafting
To me
Never enough
I cannot live without her breath.”


Here’s something a little different, an anthology of Native American Song Poems edited by Brian Swann.  Mr. Swann has culled through the anthropological record to provide this mix of staggering beauty, unadulterated humanity [including the finest love-poem I’ve ever read], and open-faced bawdiness.


Within you will find women singing of vaginas as large as canoes with clitorises as large as men-and these are compliments. The anthropologist’s notes showed that these were sung by old and young women alike with no sense of it being indecent or untoward—just as we sing about the “Old Rugged Cross” with a dying man on it and it does not strike us as grisly.


I will admit there are several in here that have such an otherworldly reference system I don’t know what to make of them [yet], but overall this is a gorgeous glimpse into an alternate perception of the world around us.


A glimpse that if studied assiduously may provide a deeper and wider view than the one we currently enjoy.
at February 27, 2018