A Conversation with Dave Robbins 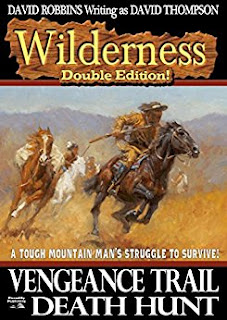 Prolific author Dave Robbins was kind enough to consent to a conversation and allow me to corral him to, primarily, his Western work.

First, thank you for taking the time to talk, most kind of you.


Thanks for the interview.


Now, allow me to say, you are one prolific man! 300+ volumes to your credit.


I didn’t start writing professionally until I was in my 30’s. Fortunately, editors liked my work to the extent that I was having ten or more books published a year, under a lot of different pen names.


Science-fiction, horror, Westerns, action-adventure, non-fiction, you name it and there is a title with your name on it. Out of all of these genres do you have a favorite, or are they all equally interesting as we can get invested in the work that is before us?


Growing up, I enjoyed all different genres. In any given week, I might go from, say, WAR OF THE WORLDS to SHANE to a Matt Helm novel. I suppose it’s only natural my own career would reflect that.

Seeing as how this blog is about the western in particular, let's home in your efforts in this area. You are the man behind the long-running mountain man saga Wilderness, which you pen under the name David Thompson. Are Nate King and Winona based on real-life personages or are they amalgamations of mountain men, or simple whole-cloth creation?

The series stems in part from my own fondness for the outdoors. I spent much of my childhood in the woods, and long admired accounts of the early frontier, especially the Mountain Men era. Having read everything I ever came across on it, when I conceived the series, I wanted to avoid stereotypes and capture the real and the true---in fictional form.
Nate and Winona are not so much amalgamations as they are personifications. Anyone who has read, say, Zenas Leonard or Osborne Russell, to mention just two, knows that some Mountain Men were keenly intelligent and astute observers of all they encountered. Some were avid readers, not at all the illiterate bumpkins we sometimes see in print and on the screen. Nor were they bigots. Nate King is a personification of that kind of Mountain Man. His lady personifies those Native American women who chose to marry a trapper and were devoted wives and compassionate mothers.

You describe land beautifully. Allow me to offer a passage from Winterkill:
"The regal Rocky Mountains were cloaked by a thick mantle of gleaming snow. Every boulder, every tree, was covered by the white blanket. From out of the northwest blew a gusty wind that stirred the surface of this pristine natural wonderland, creating swirling sprays of fine white mist."
That is evocative scene setting.


It strikes me that Westerns are as much about the land as they are about the people and events. Do you find this to be true in your approach?


Setting is always crucial. Science fiction stories are regularly woven among the tapestry of ‘the stars’. For Noir Crime Fiction, it’s often ‘the city’. For WILDERNESS, the mountains are as much a factor as the protagonists, in that the land and its inhabitants---both human and bestial---are interactive principals in many of the stories. Nate goes from being a ‘city boy’ to a Mountain Man---and a large part of his evolution is molded by the Rockies themselves.

How much research goes into your Westerns? Historical readings? Visiting of locations? Or are we simply seeing a good craftsman at work?


All of the above. I do the proverbial tons of research. (Which I love doing) Many of the locations are those I’ve lived in or near or explored. For instance, I lived close to the foothills of the Rockies for many years and got up into them many times. Often I would take notes or pics when we were riding or walking so I could recapture the setting in a story. (In fact, some of the early WILDERNESS take place in and round Estes Park. A crucial scene takes place in a meadow where I saw two bull elk battle. You might get a grin to know that in an ENDWORLD, there’s a fight in my house. Or what was left of it after WWIII. And in a TRAILSMAN, Fargo took down a bad guy in my front ‘yard’, which happened to be forest.)
Again, this harkens to my desire, in whatever I write, to make it as real and true as I can.


You are also behind the Trailsman series. There is a lot of pulpy fun to be had in the exploits of Skye Fargo and his wanderings. For example, in Menagerie of Malice Fargo encounters an elephant on the loose in Utah. Where do you find such inspiration that allows you bring fresh odd elements like these to the table? 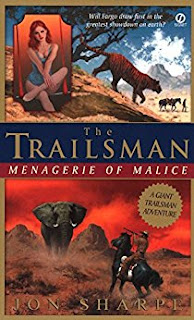 When a series is hundreds of books along, a writer owes it to the reader not to crank out the same-old-same-old. A little novelty goes a long way, provided the writer doesn’t jump the shark. When my research revealed that the first elephant was brought to the U.S. in the late 1700‘s, and by 1850 about thirty traveling circuses were touring America, the image that popped into my head was Fargo pitted against a rogue bull elephant. It was something that had never been done before, and I hoped the reader would find it as ‘Wow!’ a moment as I did.
My purpose in all my books---the subtext about the importance of the family and the home and other values aside---has been to entertain.


You tackled a classic in writing The Return of the Virginian. Were you daunted in any way by assuming the mantle of such a representative novel in the genre?
Are you a particular fan of Wister's or was it simply an exercise in carrying on the story? 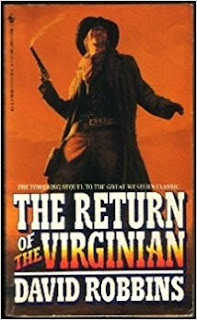 In this instance, cosmic synchronicity struck. THE VIRGINIAN was one of my very favorite novels when I was a kid. Read it when I was ten. Still have the beat up paperback with my scrawled signature and the date when it was given to me. When I was offered the chance to do the sequel, I relished the opportunity. I tried to do Wister justice by reading all his journals and letters and thematically and structurally replicating his original as best I could.

What Western authors or individual western works have inspired or impressed you? Works that made you say to yourself, "Now, that's how it should be done."

There are quite a number I admire. The very first to blow me away was THE U.P. TRAIL by Zane Grey. SHANE ranks up there, too. In no particular order, others that greatly impressed: WARLOCK, HOMBRE, TRUE GRIT, THE SHOOTIST, MCCABE, THE STALKING MOON---books that are on many ‘Best Of’ lists. For a reason.


Do you have any Western picks that are a bit off-beat that might be little-known to many Western aficionados?


Ben Haas did some great novelizations. ROUGH NIGHT IN JERICHO is one of them. Clair Huffaker wrote terrific Westerns. His BADMAN became the movie THE WAR WAGON

In your Blade series, we have a protagonist wandering a post-apocalyptic landscape. Do you find any similarities in construction between this character and the Westerners you create wandering the frontier?


There are structural similarities in a general sense but I would offer that each genre has its own specific tenor that sets it apart from others. I’m a big fan of Poe, and very much agree with his THE PHILOSOPHY OF COMPOSITION. Permit me to quote him: ‘I prefer commencing with the consideration of an effect. Keeping originality always in view---for he is false to himself who ventures to dispense with so obvious and so easily attainable a source of interest---I say to myself, in the first place, “Of the innumerable effects, or impressions, of which the heart, the intellect, or (more generally) the soul is susceptible, what one shall I, on the present occasion, select?” 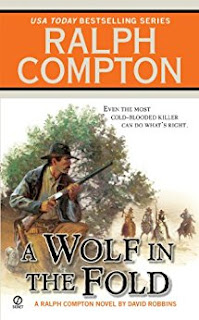 Let's say we have a reader who has never sampled your Western work, what handful of titles would you point them towards to say, "Start here!"?

WILDERNESS would make for some fun reads. BLOOD FEUD and HOUNDS OF HATE. Any of my Compton books, but especially A WOLF IN THE FOLD, THE EVIL MEN DO, and BROTHER’S KEEPER.


What's next in the pipeline from David Robbins?


Still doing WILDERNESS and ENDWORLD. Have a new series called BATTLEFIELD MARS and another known as ANGEL U. And other stuff.

Thank you so much for taking the time!
Thank you for the opportunity.
at January 08, 2018