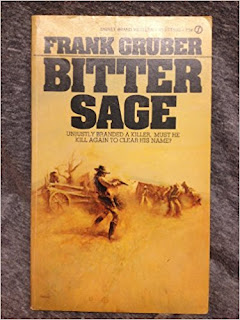 “I’ve got the revolver,” Vesser reminded.


“I wish you didn’t have it.” Tancred hesitated. “You’ve fired a gun, Mr. Vesser. And you’ve probably hit your target.”


“You’re not better than they are,” Tancred said, earnestly. “There’s a difference in shooting at a deer and—and a man. You have an aversion to killing—any normal man has—and whether you’d want to or not, you’d hesitate before actually pulling the trigger on a human being, They won’t. They’re killers.”


This brisk 1954 novel from Frank Gruber tells of Wes Tancred, a sort of stand in for Bob Ford, of killing Jesse James fame. We follow Tancred as he tries to live down a reputation of having killed his own legendary outlaw.


This brief novel clocks in at a mere 144 pages, and while not world-shaking in novelty, it plays the old game well and is not a bad way to spend a winter afternoon.
at January 16, 2018