The Blood of the Conquerors 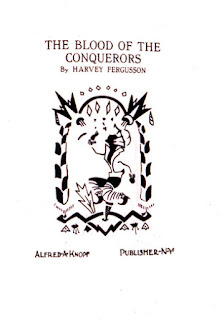 “Immense and empty the country stretched before him—a land of far-flung levels and even farther mountains; a land which makes even the sea, with its near horizons, seem little; a land which has always produced men of daring because it inspires a sense of freedom without any limit save what daring sets.”


This 1921 novel by former journalist Harvey Fergusson shows up on a few Best Western lists. It indeed has a Western setting, New Mexico to be specific, but the emphasis here is people and cultures, and the divide between the Spanish and the Anglos.


It is wise and profoundly cynical and eschews action for drawing character. With that said, if one is in the mood for a more contemplative work than most, and one that while not necessarily dark with violence is less than rosy in the estimation of human character and motives it’s a fine novel on that count.


This one tips the balance from entertainment to literature.
at January 25, 2018