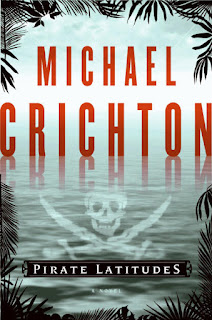 “One never really understood life in the New World until confronted with the actual rude experience.”


What is a pirate novel by noted science-thriller author, Michael Crichton, doing in a blog about Western fiction?


I must admit, I find Louis L ’Amour’s encompassing definition of the genre as “frontier fiction” rather than Western fiction quite compelling. It reminds me of historian Frederick Jackson Turner’s definition of the Western Frontier, an edge or boundary that ever moved westward, whether that Westward expansion be a wagon train leaving Independence, Missouri or, as we have here, a Massachusetts-bred privateer in Port Royal.


With that justification out of the way, on to the novel itself.


Pirate Latitudes was one of two unpublished novels found in Crichton’s files upon his death.


Here we have a briskly paced adventure that is both full of the familiar piratical themes but seated a bit deeper as Crichton seems intent on providing a little bit of “Here’s how it really was” history lessons along the way. The novel is the better for it.


For those who like authenticity, I can vouch for the sailing tactics in sea battles hewing to proper form. And if one enjoys good scoutcraft in their western novels, you will find more than a few insights here to enjoy.


The breathless pace does seem to become a bit rushed in the climax, but that is hardly a reason to take a pass on a novel that moves so quickly and seems to have as its primary goal—high adventure at a fast pace.
at May 23, 2018