He Rode Alone by Steve Frazee 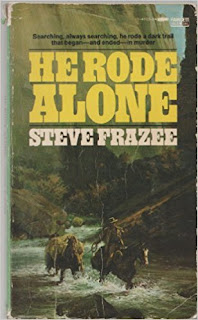 “For every bastard that runs out on you in a fix, there’s three good men who won’t.”


A rugged, lean and mean piece of work by the always reliable [to my mind, at least] Mr. Steve Frazee.


The author often does seriocomic picaresque tales, this ain’t one of them.  The tale opens with this bit of bleakness


“The boy walked out of the wilderness in the late summer of 1855, carrying the sun-blackened remains of a jack rabbit he had been eating on for two days. He had been alone in there for ten days.

Behind him he had left three graves. With him always was the memory of a family named Snelling, that he would one day hunt down and destroy - slowly, terribly.”


I shall give away no further particulars so  that the author’s work can speak for itself. The novel has grimness on its surface, but there is also much heart at its core.