The Cowman & His Code of Ethics 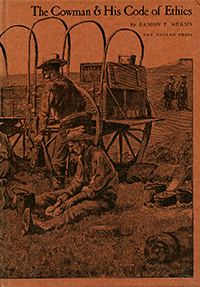 “Back in the days when the cowman with his herds made a new frontier, there was no law on the range. Lack of written law made it necessary for him to frame some of his own, thus developing a rule of behavior which became known as the ‘Code of the West.’”


This non-fiction offering from noted Western historian, Ramon F. Adams, seeks to put into written form that which was never formerly circumscribed.


It is a slim volume; my autographed original copy runs to 33 pages. It has a wistful tone, and perhaps a bit of wishful thinking for “how things were.” Who am I to doubt Mr. Adams knowledge of the era?


Wishful thinking or not, it is full of lovely edicts. One could do worse than to absorb and attempt to hew to the advice within.
at November 10, 2017

Email ThisBlogThis!Share to TwitterShare to FacebookShare to Pinterest
Labels: non-fiction