Many Rivers to Cross 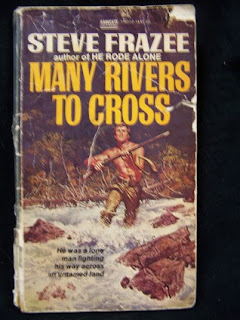 
“You are?” She closed the space that Bushrod had opened between them. “If that’s so, you might show that you’re obliged.”


“I reckon maybe that’s the least I could do.” Bushrod leaned down. He kissed her lightly on the cheek, and the clean, faint odor of her skin tingled in his nostrils.


This light-hearted 1955 novel from the ever-reliable Steve Frazee exhibits him in his comic mood. We have the tale of a Kentucky trailblazer and the young mountain girl who decides “He’s the one” and the lengths that she’ll go to get that one.


It has lots of lusty charm that reminded me of the good ol’ time had by all in the John Wayne film McLintock.


It has a serious turn with a bit of jeopardy in a spot or two, but for the most part, Frazee seems intent on bringing a smile to our lips with this mountain folk bedroom farce.