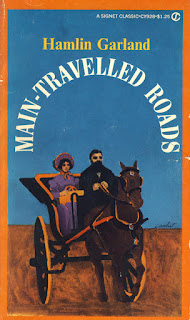 “Council moved about uneasily in his seat and stopped his stammering gratitude by saying: "Hold on, now; don't make such a fuss over a little thing. When I see a man down, an' things all on top of 'm, I jest like t' kick 'em off an' help 'm up. That's the kind of religion I got, an' it's about the only kind."


They rode the rest of the way home in silence. And when the red light of the lamp shone out into the darkness of the cold and windy night, and he thought of this refuge for his children and wife, Haskins could have put his arm around the neck of his burly companion and squeezed him like a lover. But he contented himself with saying, "Steve Council, you'll git y'r pay f'r this some day."


"Don't want any pay. My religion ain't run on such business principles."


Written in 1891 by Hamlin Garland, this cycle of short-stories, some linked by locale some not, all take place in small farming communities. The sense of place is strong, the drawing of humanity is beautiful. It reminds me of Sinclair Lewis’ Main Street but without the narrative tricks to get in the way of the emotion.


Speaking of…the emotions here are deep and…if there is a flaw, it is that they almost always lead to sadness. Deep sadness of unrequited love, lost opportunities, crushing defeat. The writing is strong as I felt much of this to my core and that’s good art. But it is somewhat depressing with there being perhaps two stories total that are upbeat.


Superlative craft, but I always opened the book with a sigh.
at November 14, 2017