“Amid the row of long nickering horsefaces at the rail Smonk slid off the mule into the sand and spat away his cigar stub and stood glaring among the animal shoulders at his full height of five and a quarter foot. He told a filthy blonde boy holding a balloon to watch the mule, which had an English saddle on its back and an embroidered blanket from Bruges Belgium underneath. In a sheath stitched to the saddle stood the polished butt of the Winchester rifle which, not half an hour earlier, Smonk had dispatched four of an Irishman’s goats in their pen because the only thing he abhorred more than an Irish was an Irish goat. By way of brand the mule had a fresh .22 bullet hole through its left ear, same as Smonk’s cows and pigs and hound dog did, even his cat.” 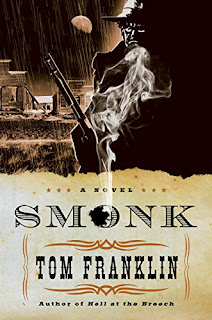 Of all the deep dark doin’s down south in the old days books along the lines of Cormac McCarthy’s Blood Meridian, James Carlos Blake’s In the Rogue Blood, and Daniel Woodrell’s Woe to Live On, this one is by far the wildest. It is the bloodiest and most perverted one mentioned here (and that’s saying a lot.) It wallows unapologetically in excess but is written lyrically, with astounding attention to the quirks and honesties of human character. The book wallows but it never descends into exploitation. It lives in the gutter and revels in it.
The full title of the novel is “Smonk or Widow Town Being the Scabrous Adventures of E.O. Smonk & Of the Whore Evangeline In Clarke County, Alabama, Early in the Last Century…”
Glorious title, glorious language in the Charles Portis True Grit vein, but I can’t say much more without ruining it if you decide to read it.
If you have a hankering for some bad doin’s in a squalid Alabama town at the turn of the last century, this is one bad wild wild ride.
at November 02, 2017