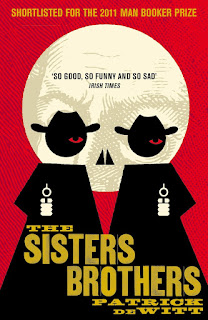 “I was sitting outside the Commodore’s mansion, waiting for my brother Charlie to come out with news of the job. It was threatening to snow and I was cold and for want of something to do I studied Charlie’s new horse, Nimble. My new horse was called Tub. We did not believe in naming horses but they were given to us as partial payment for the last job with the names intact, so that was that. Our unnamed previous horses had been immolated, so it was not as though we did not need these new ones but I felt that we should have been given money to purchase horses of our own choosing, horses without histories and habits and names they expected to be addressed by. I was very fond of my previous horse and lately had been experiencing visions while I slept of his death, his kicking, burning legs, his hot-popping eyeballs. He could cover sixty miles in a day like a gust of wind and I never laid a hand on him except to stroke him or clean him, and I tried not think of him burning up in that barn but if the vision arrived uninvited how was I to guard against it? Tub was a healthy enough animal but would have been better suited to some other less ambitious owner. He was portly and low-backed and could not travel more than fifty miles in a day. I was often forced to whip him, which some men do not mind doing and which in fact some enjoy doing, but which I did not like to do; and afterward he, Tub, believed me cruel and thought to himself, Sad life, sad life.”


If you are a lover of gorgeous language and pages evocative of something a bit grim, then you read that opening paragraph from Patrick Dewitt’s novel and now have no need of my thoughts on the matter. Chances are you went right to the source and skipped me telling you to do just that very thing.


This exceptional novel remains strong in that opening vein throughout. It is full of side-trails, off-trails, back-trails, and odd trails as the hired killers, the Sisters brothers, Charlie and Eli Sisters seek their quarry.


It plays as a True Grit odyssey with a bit wryness thrown into the mix.


Fans of the Western and the sardonic will find glories here.
at November 09, 2017