Hell at the Breech

Oscar looked at the cup. “She ain’t got no friends. The women won’t mention her name and the men look down at her from on top of her.” He sipped from the coffee. 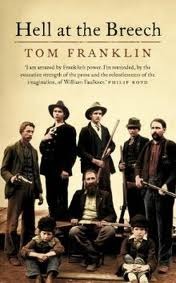 Tom Franklin’s turn-of-the last century tale of rural Alabama follows the rise of a vengeance committee called Hell at the Breech. As in all of Franklin’s work, nothing is rosy, nothing is pure, and the outcome is violence in spades.


Based on actual events, the author brings his considerable skill to bear on giving even tangential figures skin and bones. Characters we believe exist, even if there are more than a few we don’t wanna meet on a dark night.


For fans of dark prose, there is much to capture the attention here.


It is no spoiler to say the novel opens with an uncomfortable drowning of puppies scene.


That sets the tone for what’s to come.


[For a revealing conversation into Mr. Franklin’s creative process have a listen to his interview here.]