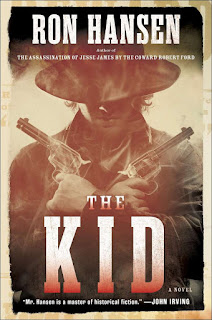 So Widow McCarty took her sons to Indianapolis, where Michael McCarty’s shirttail relatives were making do, and it was there in 1865 that she became cordial with William Henry Harrison Antrim, the American son of Irish parents who’d been for ninety days an infantry private with Indiana’s 54th Regiment. His first three names were those of the ninth president of the United States, who died in office just before Antrim was born, but he grew up to be just an affable goof with a high forehead who pronounced the word “ain’t” as “ainunt.” A clerk and messenger for the Merchants Union Express Company, Antrim was twenty-three, or thirteen years Catherine’s junior, but he was easygoing company and wasn’t ugly, he adored his fine Cate when he wasn’t drunk, and he got on with the boys, whom he demanded all him Uncle Billy. When Antrim became a lazing fixture on the chesterfield sofa in the house, it was determined that to avoid confusion Billy McCarty would henceforth be called Henry, his middle name. The Kid was not fond of it.


Another superbly researched historical novel from Ron Hansen. His The Assassination of Jesse James by the Coward Robert Ford brought James and surrounding personages to life. His Desperados pulls the same well-researched but narratively fascinating trick with the Dalton gang.


Here, Hansen takes on Billy the Kid and adds real-flesh to legendary bones. We can feel the charm and the humor of this renowned outlaw, as well as his less than savory aspects that has rendered him to history’s lists of the infamous. It is heavy on fact, but the research never feels intrusive; it becomes part and parcel of the story without traipsing into myth-making.

Email ThisBlogThis!Share to TwitterShare to FacebookShare to Pinterest
Labels: Billy the Kid, outlaws