“Reason I like animals better than most humans is that they can’t help being what they are. And don’t try to be any different. Or make apology for being like they are.”


They are violent, but not any more so than many I could name, or perhaps you could name. 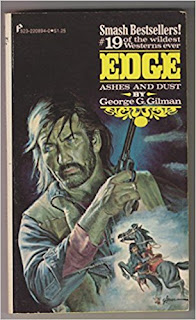 The violence is not upsetting [nor is it meant to be] it is always of the grand operatic variety one would find in a Spaghetti Western film. As a matter of fact, George Gilman [aka Terry Harknett] cut his Western teeth writing novelizations of Spaghetti Westerns, it was then realized he had a flair for it and thus the Edge series was born, plus a few others we’ll get to another day.


Spoiler-free as usual, I want to offer that my tastes run to James Carlos Blake and others of that ilk, but I find myself going to the Edge series now and again for a drink of pure entertainment. Gilman has all the Spaghetti Western tropes down and has such creative variation on them I find myself often thinking, “Ah, that is a fine scenario. Give Franco Nero a call and let’s do it.”


Gilman has a way with baroque set-pieces in the Sergio Leone vein that does the genre proud.


I do have a complaint. The author has a tendency to end most chapters with a pun coming from Edge’s lips. Perhaps it’s just me, but this grates. It lifts me out of the grim setting the author has created. But your mileage may vary.


Oe last thing. Shane Black the writer-director of the brilliant film Kiss Kiss Bang Bang and of the very successful Iron Man 2, wrote and directed a pilot for Amazon based on Edge. Bang on! Fantastic Spaghetti western feel that captured the tone of the novels nicely. You can tell a fan was at the helm. Amazon passed on the project. A shame.
at October 27, 2017