“He stares at the utterly uninterested stars and berates himself in a howling silence, curses himself for an irresolute weakling and for being the sort of pathetic fool who wishes he could have a moment back again so he might use it properly. Fool! A man takes an action or he does not-and then the moment is fled to wherever all moments in relentless succession do irretrievably flee.”


Blake is an astonishingly able author who writes with true craft, depth, skill, and poetry. The only mystery to me is why he is not better known.


He has written many novels in his saga of the Wolfe family, but much of his career has been in offering fictionalized accounts of true personages, and these are uniformly excellent.


In Wildwood Boys Blake takes on “Bloody Bill” Anderson and gives us full-blooded humanity that never shirks the fact that much blood was spilled to earn that nickname.


There is violence here, as there has to be, because Anderson’s life was one of violence; to downplay that would be a bit of hypocrisy. Blake pushes our faces into the violence but it never feels exploitive, more immersive as in a stab at verisimilitude. In a manner of “This is how it was, so this is how it must be told.”


Anything less would be a lie.


But within the gouts of blood there is much poetry, much humanity. A never-ending grasp on humans struggling through their existences.


The opening quote demonstrates we are not in the hands of a formulary writer, but one who has a deep rich interior life and is able to provide that same interior for real-life personages so that they live and breathe for us. 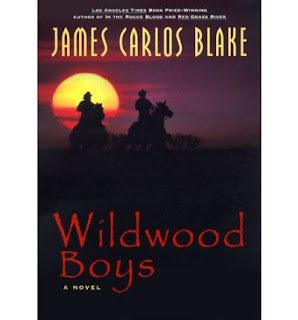