The Man from Montana

This slim volume of Ernest Haycox short-stories published by Dell in 1964 contains 11 stories,  most of them written in the 1930s.

Approximately half of them lie in the realm of the formula Western and are of little interest to me. Don't get me wrong, these standards are well-written but they pale in comparison with  what Haycox does so well.

Two of the stories are rodeo tales ["Rodeo" and "Second-Money Man"] and are written with such descriptive authority we can feel the jar in our spines as the animals come down with arched-back, stiff-legged malevolent intent. The second of these rodeo tales "Second-Money Man" is chockfull of wise human observation and calls to mind the excellent Sam Peckinpah rodeo film "Junior Bonner" starring Steve McQueen.

Other stand-outs include "Grasshopper Dance," "The Misfit," "Deep Winter," 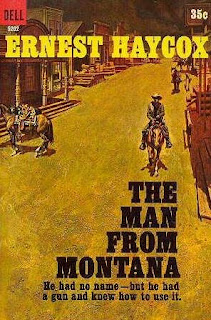 and "The Outcast." These tales of families surviving on the plains and the hard decisions that must be made in the ad hoc democracies of temporary but necessary community excel in humanity. One is reminded that John Ford made the classic film "Stagecoach" from a Haycox story and the director's grasp of the small details in that film and many of his later ones make it hard to tell who influenced whom more, Haycox on Ford or vice versa.

The final story "The Outcast" takes the seemingly nothing episode of a youthful practical joke and puts it through the paces with a tragic outcome and then follows up with an even more tragic decision that must be made in the joke's aftermath. It is with tales such as "The Outcast" and many others found within that remind us why Haycox was called the Dean of Western writers.

There's more to the west than shoot-em-ups, there is humanity writ large and with nobility.
at October 17, 2017