News of the World

“The greatest pride of the Kiowa was to do without, to make use of anything at hand; they were almost vain of their ability to go without water, food, and shelter. Life was not safe and nothing could make it so, neither fashionable dresses nor bank accounts. The baseline of human life was courage.” 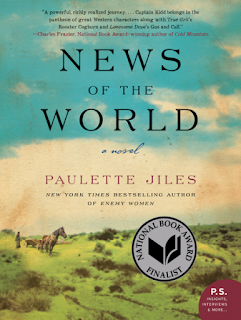 A simply gorgeous novel filled with one affecting episode after another. I offer no more plot spoilers than one may find on the inside of the book jacket.
Post-Civil War, Captain Jefferson Kyle Kidd, travels the towns of northern Texas where he reads from newspapers for donations to a news-starved populace. Newspapers being a scarce commodity he draws quite a crowd.
He is approached to return a young girl who had been a Kiowa captive to her family. And there our journey begins, this old man and this odd young girl who is not quite of either civilization.
“Her gestures and expressions were not those of white people and he knew they never would be. She stared intently when something interested her, her questions were forthright and often embarrassing.”
As we follow their trail we grow to love both characters fiercely. We watch them mistrust and attempt to understand one another. I will offer no more than that I envy the reader who has yet to encounter this novel.
Well, one more thing, if Mr. Jeff Bridges or Mr. Tommy Lee Jones would be so kind as to snatch this gem of a book up and render it into a film I’d be much obliged.
at October 26, 2017