The Vengeance Trail of Josey Wales

“The unspoken nature of Josey Wales was the clannish code. No common interest of business, politics, land or profit bound his people to him. It was unseen and therefore stronger than any of these. Rooted in human beings’ most powerful urge—preservation. The unyielding, binding thong was loyalty. The trigger was obligation.” 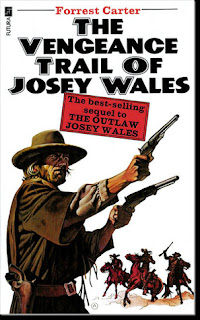 Forrest Carter’s follow-up to the exceptional The Outlaw Josey Wales [aka Gone to Texas] takes Josey and his band South of the Border a few years after the events depicted in the prior novel.


This being the 1860’s post-war period—times were bad.


This being the 1860’s post-war period down Mexico way—times were even worse.


With that said, Josey and crew face bad and worse times in more than a few rousing sequences. The violence is harsh, comes fast, and comes often. 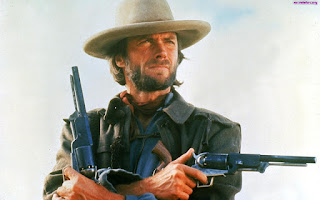 But, the neat trick Carter is able to pull off is this strange loyalty amongst the band. The unspoken affection or at least alliance of simpatico spirits that harsh times sometimes creates.


Carter is able to imbue Wales with that singular laconic iconic persona where a simple “You’ll do” from his lips is high praise indeed.


For my money, this is my favorite of the two novels, but that may simply be because the film has rendered so much of the first novel familiar, where here the reader, even if familiar with the film gets to enjoy an iconic character with fresh eyes.
at October 23, 2017