The Call of the Wild

“He was sounding the deeps of his nature, and of the parts of his nature that were deeper than he, going back into the womb of Time. He was mastered by the sheer surging of life, the tidal wave of being, the perfect joy of each separate muscle, joint, and sinew in that it was everything that was not death, that it was aglow and rampant, expressing itself in movement, flying exultantly under the stars and over the face of dead matter that did not move.”


It seems presumptuous to review The Call of the Wild as it is commonly saddled with the baggage of being called a classic. I review it all the same because once you label a book as a “classic,” it become well-known and often little-read.


I get that little-read paradox. Often what someone means by “classic” is important, or influential, or first of its kind. Then what follows in the important book’s wake are several imitations and a few worthy experiments that surpass the originating influence. These surpassing copies then render the original a bit familiar in retrospective readings.


Classic, to be picky, should be a word reserved for books that are both influential and still a pleasure to read.


With all that said, The Call of the Wild is a classic.


Spoiler-free, this is more than a mere man and dog story. This is a civilization versus inner-wildness story. The wildness inside a domestic dog, the wildness that often lies just below the surface of men.


London is careful to not simply make a “Wild = Good, Civilized = Bad” argument. He lays bare the good and bad of civilized behavior and the stark realties of wilderness living.


The theme, at root, is what do we become or revert to when all is stripped away. Yes, we see this in the journey of the dog, but my favorite sequence in the book involves two potential gold-prospectors and their female companion.


Their slide from polite pretense to what they really are is something that I’ll not soon forget. The details are small but so on point, I see London’s point of pretense in daily life in an unfortunate few.


One last observation. This classic is sometimes classified as children’s literature. I have no problem with a child reading this book as it is mighty instructive, but check that language out at the top of this essay and compare it with the children’s literature or young adult fiction of today.  Standards just might be slipping a bit.
London sets the bar high with this one. He’s got a lot to say about humanity, much of it not very nice. Some of it exultantly uplifting. 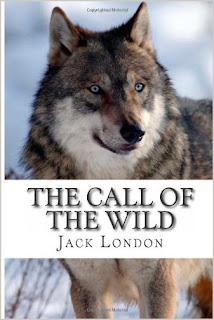 Email ThisBlogThis!Share to TwitterShare to FacebookShare to Pinterest
Labels: Classic Fiction, Classic Literature, Jack London, The Call of the Wild