“His mother had once told him that though he’d find many kinds of people in the world, each could be sorted into those who help and those who hurt. ‘I don’t tell you this to make you suspicious of others,’ she said, ‘but so you might steel yourself against hurt. The hurt others inflict on you, but also the hurt you might inflict on others. You must always be the one who helps.’”


This poetic [and at times grim] novel is an exercise in transferring a story from one genre to another. Here, Thomas Fox Averill takes the folk ballad “Tennessee Stud” and composes a tale of a young man, the titular horse, and the long-winding road they must take to escape troubles back home.


Spoiler-free as usual, this road allows us to experience many episodes and many characters, some good times, some mighty bad times, all with a tinge of been there, done that authenticity.


The authenticity comes from both Averill’s skills as a writer and his diligent preparation. In putting this novel together he visited race tracks, historic missions, national parks and other such locales to get a feel for the land and the people along the route he has his characters travel.


This preparation, this care shows. It reminds me of the immersive authentic work that Phillip Meyer put into his novel The Son.


This novel is well worth a look for those who value authenticity and might easily appeal to fans of James Carlos Blake.


rode as a novel is a good read along a long road, with more than enough wisdom along the wayside to be a bit more than mere entertaining fare. 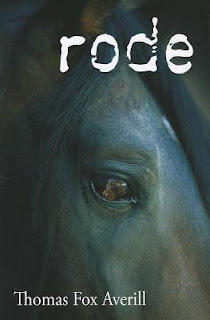