“He became aware of a pair of loafers sitting on a coil of rope and watching the unloading with the peculiar enjoyment of loafers the world over at the observation of any kind of labor being done by others. In the manner, likewise, of all loafers, they made free with their comments.”


The above extract from Paul I. Wellman’s fictionalized biography of Jim Bowie is indicative of what this author does so well; he ably drops such human observations and character evaluations on practically every page.


Wellman just isn’t a keen observer of humans but he is a fine historian who takes on Bowie, both the man and the myth, and builds both a flesh-and-blood human being and expands on the mythology. His baroque excesses in numerous knife duels let alone the otherworldly origins of the knife itself stretch credulity, but all else here is so down to earth and smacks of realness one can easily forgive these dramatic excesses.


Wellman, in this novel and others, does an excellent job portraying women. Many male authors fall down in this area providing women as props or supports or pawns for the male protagonists but Wellman always gives us well-drawn complete personalities. Sometimes they are as noble as the protagonist, and sometimes they are as exasperatingly vexing as Scarlett O’Hara, but this exasperation and sometimes drawing of a manipulative character is always laced with some insight that allows us to see the human behind the manipulator. No mean feat, that.


As history it is not badly done if one cuts slack to the knife mythologizing, as fiction it is far better in telling a fine tale in a mature style. 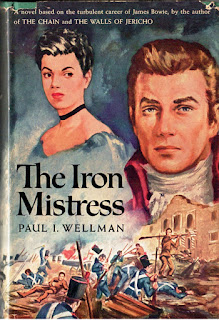