[To a young man who left the farm because all he got out of it was callused hands.]


“Let me see those big hands of yours,” Cutler said.


Taylor held them out. “They ain’t so bad now.”


Cutler looked at them. “That’s right. They’re beginnin’ to look white as a baby’s. Look at mine.” He held his own hands out to the firelight. “There’s a scar from a beartrap that zigged when it should have zagged. This is where a bullet went through, here in this tender part next to the thumb. These callouses are from just, plain, dirty work. But ugly as these hands are, they got experience written in ‘em. And without experience, your hands and you are gonna keep lookin’ like a little boy.”


This brief novel by H.V. Elkin, is the third in the John Cutler series currently re-published by Piccadilly Publishing.


The series was started by the formidable John Benteen, who delivered the 1st two John Cutler novels before his death.


Cutler, the character, is a trapper of men and beasts who is called upon to look into a series of killings that takes him among an Indian tribe that he formerly knew quite well.


I’ll proceed no further for spoiling or over-explanation kills a bit of the fun of reading, but I do want to say that, while this is without a doubt a formula novel that was probably knocked off lickity-split, that opening extract shows that uncommon consideration was put into this swift work. 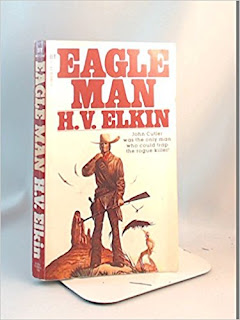