“His adult life, he had watched people turning the same day over and living it again for years at a time, and he thought himself happy it was not his lot.”


Two words come to mind in regard to this neo-Western: Wicked & Poignant.


Unusual combination that, but Holbert is able to nimbly walk that tightrope over what is usually Cormac McCarthy or James Carlos Blake territory.


On the surface we have a retired lawman called on to hunt a serial killer on an Indian Reservation. If that plot sounds familiar, and distressingly hackneyed, allow me to reassure you that the author has other plans in mind for us.


There is a grim tone in this novel as we live inside the skull of lawman Arthur Strawl. Inside his skull is not necessarily a pleasant place to be. He’s a man with regrets, and he has a lot be regretful for. The moments of revelation regarding past sins are truly shocking coming in the wake of a character we have come to respect.


As usual, we’ll keep it spoiler-free here and allow the authors room to do what they do and plead their own cases, which Holbert does with poetic and dark precision.


I will say, there is a scene involving an uncooperative Bureau of Indian Affairs office that will stick long after the reading is done.


Lonesome Animals is full of lasting scenes and observations. Just as the opening quote alludes, there is a lifetime of varied experience in lawman Strawl and the peek we get is compelling stuff. 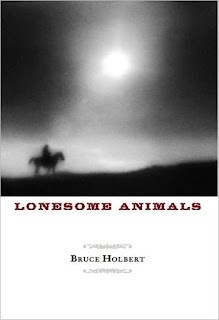