“My admiration for the generals on our side survived wounds, prisons, and changes of fortune; but time has tempered my views on some things, and now I don’t enthuse over generals when the men of the ranks who made them famous are forgotten. Through the fortunes of war, I saluted Grant when we were surrendered, but I wouldn’t propose a toast or take off my hat now to any man that lives.”


This 1903 novel about a cattle drive rings with such authenticity that there are a few sources that take it as fact, or at least fact mingling with fiction.


This verisimilitude is due in part to the author, Andy Adams, having experienced cattle drives himself and he folds his own experiences, observations of others, and trail drive hearsay into the narrative.


Fans of Larry McMurtry’s Lonesome Dove saga cannot but assume that McMurtry studied this novel hard as it captures that same laconic telling, and rambling pace that one finds especially in the first of the Dove series.


We follow Tom Quirk and his fellow trail-drivers through episodes that highlight both the hardships of the trail and the camaraderie which fosters growth in these finely-drawn human beings.


I spoil, hopefully not much, in supplying that there is a mishap at a river-crossing that culminates in a homey impromptu graveside eulogy. I would love to include the eulogy verbatim here, but then that would deprive the reader the joys of the context and having followed these men and boys along the way. I have no trouble admitting that tears came to my eyes readily upon reading it.


This novel has heart.


In a world where much reading is surface, that says a lot. 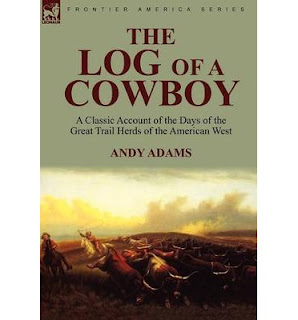